HAS ANYONE SEEN THIS MAN?

Posted by Curwen Rolinson at 17:46 No comments:

It's a well-known fact that I have an ongoing vendetta with ACT on Campus.

It's a slightly less well-known fact that foremost among the reasons for said vendetta are the continuing antics of AoC Auckland's hilariously inept former Vice President Cameron "Get Raped" Browne. 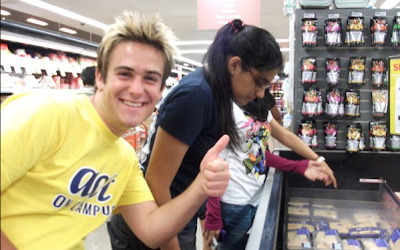 Here's Cam acting creepily around unsuspecting women while on the campaign trail.

What's made my evening tonight though, is news that CWB is being investigated by the New Zealand Police for breaching the Electoral Act 1993 by electioneering on election day (maximum fine $20,000).

Handily, he was quite blatant with his offending, which appears to have been some sort of attempt at political protest. Personally, I hope they book him for the full $20k (which works out at around $2222.22 per word).

I'm sure Cam's absolutely ecstatic that he got exactly what he wanted out of this one. He's back in the national media, he gets to put his espoused principles to the test as a financial & legal martyr, and his apparent cause celebre of freedom of speech at any cost (this time hopefully paid out of his own pocket) gets more public exposure.

"Excellent."
Posted by Curwen Rolinson at 02:17 No comments:

Praise From A Most Unexpected Quarter

What David Farrar thinks of my work ;)
Posted by Curwen Rolinson at 23:11 No comments:

"The Other Mayor Parker"

Posted by Curwen Rolinson at 22:26 No comments:

ACT on Campus on Censorship

Anyone who has even a passing familiarity with me will know that I vehemently despise ACT and its sycophantic youth wing, ACT on Campus. Indeed, it would be fair to say I've got something of a vendetta.
I'm not going to go into the reasons for why in any detail, but suffice to say that apart from seeking to further ruin our economy and nation, they're an odious bunch of hypocrites at the best of times (for more detail, please see here).

Of course it's what happened next that provides the entertainment value. ACT has always prided itself on being a "Party of Principle"; and looks set to continue to do so even with its Parliamentary Caucus composed entirely of racists and homophobes. Presumably because of this potential contradiction , ACT on Campus has always prided itself on being the more-ideologically pure Libertarian vanguard - keepers of the flame in the face of crusty paleoconservative contamination of the mother-party.

With any leadership transition you're going to get friction (and, frictional leadership transitions are something ACT is definitely familiar with), and this may well lead to criticism of either the outgoing incumbent or his incoming (designated) successor. Presumably, as staunch libertarians, free speech and frank discussion on this issue would be valued by AoC. They wouldn't want to censor or censure dissenting voices in internal debate - that would be coercive and against the principles of freedom they claim to hold so dear, right?

Well here's what's been happening inside ACT on Campus over the last 36 hours... 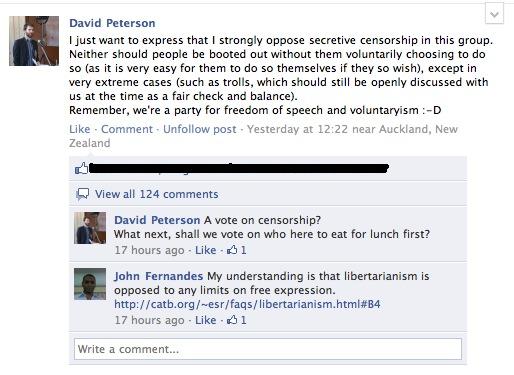 And here's what outgoing President Peter McCaffrey had to say in response to the allegation of censorship...

And, upon somebody pointing out that "Danny Libertarian" (geez these guys have imaginative Nom-de-Guerres don't they) definitely didn't leave AoC of his own accord (i.e. was kicked by an administrator ... of which there's precisely one, and guess who it was)...

So, apparently, ACTresses criticising President McCaffrey, his leadership style or his choice of hand-picked successor wind up being censored and "accidentally" expelled from ACT on Campus. Way to run a supposedly Libertarian organisation, Peter!

Posted by Curwen Rolinson at 20:16 No comments:

3News takes over the Labour Party

Recently a former leader of the Labor party announced his plans to retake his old position. Apparently (if this evening's edition of 3News is to be believed), Phil Goff's trying to do the same thing right down to his use of a foreign affairs press conference to make it public.

As Campbell would say, "Maaaarvellous".

Obviously this isn't a serious stab, but it's refreshing from this commentator's position to observe that inside 12 months 3News has gone from trying to overthrow Goff's leadership of Labour via misstatement to misstating Goff as leader.

Could this indicate Shearer's leadership honeymoon is over...?

Are the knives out?

Should they instead be out inside the editing room?

Stay tuned for more in this, the most recent Labour Leadership Challenge!
Posted by Curwen Rolinson at 02:07 No comments: